Never Miss a Chance to Do the Most Good

Please enter your name, email and zip code below to sign up!

Never Miss a Chance to Do the Most Good

Please enter your name, email and zip code below to sign up!

SERENDIPITY from The Salvation Army Alaska on Vimeo. 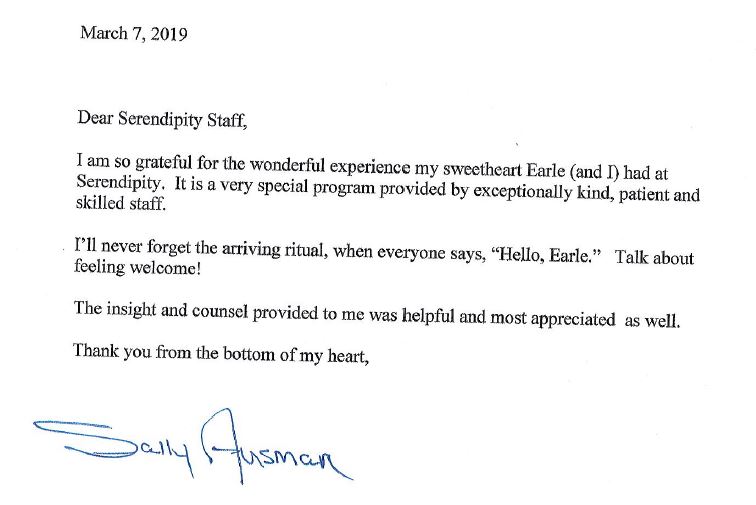 To Whom It May Concern;

I am writing this letter in support of continued funding for Serendipity Adult Day Services. Serendipity has played a very important role for my family. My mother, Shirley, was diagnosed with Frontal/Temporal Dementia in January 2014 after living in my household for the prior 2 years. As her disease progressed, she was no longer safe to leave alone in our home while my husband and I were at work and our daughter was at school. Thankfully, we were made aware of Serendipity through a family friend.

Shirley began attending Serendipity in March 2015. She was able to utilize the self-pay sliding scale so that her minimal income from Medicare covered the services. We would not have been able to afford the program otherwise. This program allowed us to keep Shirley in our home until February 2016. Sadly, at that time her diseased had progressed to the point that her behavior was so disruptive to our family life that she was placed in an Assisted Living Facility.

Since then, Shirley has continued to attend Serendipity on a daily basis. It continues to provide her with a pleasant environment with smiling, friendly faces; a consistent schedule; and staff with great knowledge and respect. Attending Serendipity has been a godsend for my mother, it has allowed us to keep her in a home environment much longer than if it was not available.

Furthermore, I would like to express my gratitude to the Serendipity program and staff for the support and caring that they have provided me and my other family members during my mother's long illness. It has been an amazing, yet sad journey. But, one made infinitely easier and better because of Serendipity Adult Day Services.

I am hopeful that funding for Serendipity can continue, so the positive impact it has had on my family, can be experienced by others.

With great gratitude to the Serendipity Program,

I would like to write this testimonial about Serendipity Adult Day Care.

In May, 2011 my mother, Edith A Thomas was diagnosed with dementia. She was not able to stay at home by herself while I worked. I started looking for an adult daycare and found one however after 2 years my mother began to be very active. When I was told to give her medication to calm her down, I decided to seek for another daycare facility.

In March, 2013 I contacted Cathy Brenner with Serendipity and my mother was accepted into Serendipity. She began to attend Serendipity within a week or so. It was a God-send. She not only was able to be active and walk around whenever she wanted to but the daycare provided a staff member to walk with her. In addition, the staff helped her to eat by feeding her and made sure all of her needs were met. Serendipity was only 10 minutes from my work and 5 minutes from home. The daycare opened from 7:30am until 5:30 pm which helped tremendously because the other facility closed at 3:30pm every Friday when my mother attended which meant I had to leave work every Friday 2 hours early.

As I stated before Serendipity was a God-send. The staff members were so loving and showed genuine concern for all the people who attended as well as my mother. When my mother became ill and could no longer return to Serendipity, Cathy Brenner stayed in contact with me either by phone and even sent a "missing you" card to my mother which all the staff and attendees signed. I still have that card to this day.

Unfortunately, on June 12, 2015 my mother passed away and Serendipity was right there to support me and my family doing our time of sorrow. Serendipity even held a memorial for the family the week after her funeral and burial. It has meant so much to me to have Serendipity in our lives and I just want everyone to know what a wonderful and supportive facility Serendipity was and is.

Cathy Brenner and all her staff are well trained and show so much love and compassion to everyone who attends. I highly recommend Serendipity to anyone who has a loved one that needs a place to stay during the day. Keep up the wonderful work and support Serendipity. We love you for all you do.